WISHING YOU A HAPPY AND SUCCESSFUL 2012.


Brahmasri T S Balakrishna Sastrigal through out his life had one wish very close to his heart. That is to resurrect the unique temple of Sri Badravalleeswarar at Thiruveezhimazhalai near Kumbakonam. Despite his repeated attempts, the wish left unfulfilled during his life time for various reasons.
Now, we have taken up this mission as our life ambition as also a New Year Resolution - 2012. On this Happy Day 1 of 2012 we extend our hands towards you all to associate and participate in our endeavor to accomplish this goal together.

Several decades back, our Great Grand Father Brahmasri Venkata Subramaniya Ganapaadigal  ( >father of Brahmasri Sambamoorthy Ganapaadigal > father of Brahmasri T S Balakrishna Sastrigal) Who was then the chief of Veda Paaraayanam at Thiruvidaimarudur Mahalinga Swamy Temple, happen to take a nap under a tree near a huge well after finishing Veda Paaraayanam at the near by Thiruveezhimazhalai Veezhi Naadhar Temple. His hands touched something silky like the feel of a snake. He woke up to find the same as the top of a Siva Linga buried underneath. With the help of farmers nearby he unearthed a full fledged Siva Temple - Siva Lingam, A beautiful Ambal Statue, A unique Vinayaka and a Nandi.
He swiftly searched through the archives for the Sthalapuranam and got this truth unearthed:
Several 100 years ago, a queen by name Badravalli was suffering for Epilepsy, Nervous Problem and Nauseating skin disorder. She went on a penance seeking a cure. Lord Dhakshina moorthy appeared in her dream and prescribed that she must take bath in the Sarva Roha Nivarini Well at Thiruveezhimazhalai, instal a Siva Linga and Ambal at its shores and pray for 48 days.
She dutifully did so and got her ailments remedied magically. She built this temple
around the divine well and Lord Siva and Goddess Parvathy descended here as the incarnation of Badravalleswarar and Badravalli respectively to cure the incurable ailments of man kind.
Our Great Grand Father sprung in to action. Using whatever resource he could muster, he built a beautiful temple. Not to keep Siva as our own property, he handed over the ownership of the temple to the nearby Thiruvaaduthurai Aadheenam who also manage the Veezhinaathar Temple at Thiruveezhimazhalai. To augment resources for its maintenance he also donated his humble land holdings.

Lots of devotees with various nervous and epileptic ailments got cured by divine grace of Badravalli samedha Sri Badravalleeswarar and the holy dip at the divine Well.
But as years rolled by, the focus on the maintenance of this temple got murkier.  Ambal Shrine caved in and the statue was accommodated inside the main Siva Shrine. The divine well needed purification and the surroundings were full of shrubs and thorns, unfit for worship.
TSB's earnest attempts to resurrect the temple, based in Chennai and touring through out the country for his Harikatha, did not bear fruits.  All that  could done was to send money to a local prohit to perform daily pooja and Neivedyam. The shrine was otherwise locked up and not worshiped.

Badravalleeswarar has now chosen to come out of his isolated Thapas and be open to devotees to shower his blessings. Yes, we have recently tumbled on a unique Lady
by name Mahalakshmi who along with her husband has taken the task of refurbishing dilapidated temples in Tamil Nadu as their life time mission through their Organisation know as MAHALAKSHMI CHARITABLE TRUST.

This 60 year old couple have resurrected 22 temples so far and work on 45 more are
underway.
By grace of Badravalleswarar, Smt Mahalakshmi has kindly accepted to include our own Badravalleswarar project as their 46th in progress. She has also obtained the necessary permission and blessings from the Aadheenam.
While Smt Mahalaksmi and her husband Sri V C Subramaniyam are blessed by Paramacharyal with enough expertise to carry out such monumental work, a humble request is put forth before every true devotee to contribute to the cost of building this temple, the total of which at this point is estimated by the Sthapathy as Rs 20 Lakhs.
Thiruppani Work will commence on 21st January 2012. A formal invitation in Tamil is attached.
Also find attached herewith the snaps of the temple as it stands today.
Every pie we contribute - every brick that we place to build a SHIVAALAYAM is equivalent to embellishing lives of our generation by thousand folds.

We once again cordially solicit the hearty participation of you all. 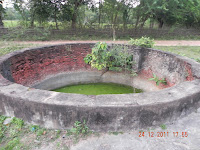 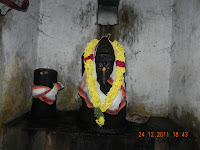 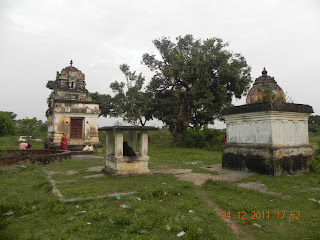 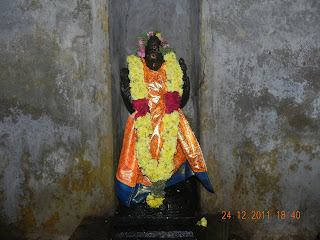 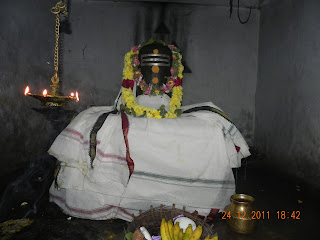 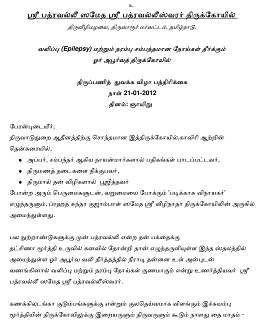 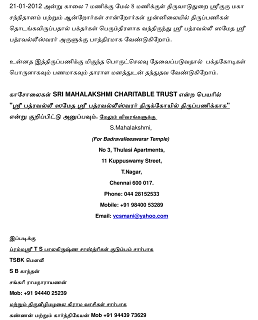